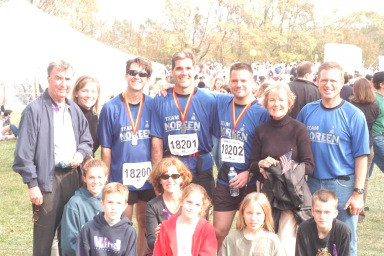 Washington, DC, January 15, 2004 -Tom Dalys mission to raise funds for womens heart disease continues to be an inspiration. This year Tom formed Team Noreen with a group of his personal friends and business associates who traveled to Arlington, Virginia this year to race in the United States Marine Corps Marathon on October 26.

Team Noreen raised more than $29,000 for WHF. Honoring his late sister, Noreen Daly Carlson, who died in 2001 from a heart attack due to an undetected heart ailment at the age of 47, members of Team Noreen completed the race in courageous fashion.

Noreen was with me all the way again this year,  said Daly. My sister was one of 250,000 women who died unexpectedly from heart disease last year. I have to do something for her and for other women, and running helps me cope with her death. Toms parents, Dolores and Phil Daly, led the cheering squad, along with Noreens children Sarah and Ryan. Members of Team Noreen are Tom Daly of Westfield, MA; Mike Cagle of Highlands Ranch, CO, Joe Stassi of Castle Rock, CO; and Drew Franzen of Gurnee, IL. You seethe teams race finish times at: marinemarathon.com